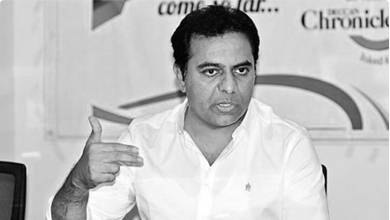 Minister for Municipal Administration and Urban Development K.T.Rama Rao stressed that the water pipelines of Mission Bhagiratha should be accompanied by optic fibre lines laid under the Telangana Fiber Grid (T-Fiber) scheme so that the internet penetration would be a reality for all towns and cities in the state.

At a review meeting here on Friday, Mr.Rama Rao asked the officials to prepare financial estimates for the proposal.

The T-Fiber project needs coordination between Municipal and Information Technology departments, he said, asked them to form a joint working group. Wherever there is no need to disturb the existing pipeline network, the optic fiber lines need to be laid separately.

He asked officials to prepare digital maps of the internet cable network along with the pipeline network. Cost for the ducts required for accommodating both the lines will be borne by the government, and the same will be undertaken in writing by the Engineer in Chief (Public Health), he said.

Referring to a meeting organised with Municipal Engineering department (Public Health) officials and working agencies on the same day, Mr. Rama Rao said CC cameras will be installed in all corporation for effective monitoring of the city. Special funds have been allotted to all cities for the purpose.

The review meeting has been held on the preparedness of the Municipal Administration for the urban Mission Bhageeratha.

Officials have apprised the minister on the structures, planning, and funding, besides the city-wise break up of works.

The Minister has asked the officials to make efforts to complete the project by next June.

Higher officials from Municipal Administration and representatives of the contract agencies participated in the meeting, a press statement informed.