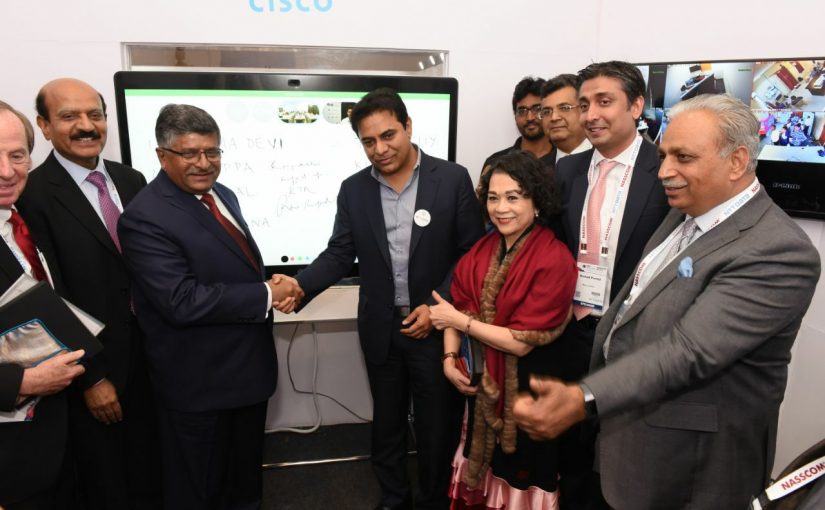 At the inauguration of World Congress on Information Technology (WCIT), Hon’ble Union Minister for Electronics & IT, Sri Ravi Shankar Prasad formally inaugurated the Technology Demonstration Network (TDN) at T-Fiber Pavilion. Minister for IT, KT Rama Rao also participated in the event.
At the inaugural event, Minister KT Rama Rao said, “We are proud to announce that we could demonstrate 1 GBPS capability to a remote household in rural Telangana. I am also happy to see us showcase telemedicine, e-education solutions on high definition (HD) video quality. This will drastically transform rural Telangana.”
TDN is a pilot network designed to showcase the ‘Government to Government’ and ‘Government to Citizens’ services that could be delivered over T-Fiber Network. TDN is established in four villages in the Maheshwaram Mandal of Rangareddy District. Forty houses and 15 offices are being connected, including a primary school, a primary health centre and gram panchayats of Mansapally, Thummaloor, Sirigiripuram and Maheshwaram villages. They
are connected to State Data Center, CM Camp Office, Secretariat, HICC and the Raj Bhavan in Hyderabad.
A total of 215 km of Optic Fiber Cable has been laid with the participating industry players – BBNL, Sterlite, L&T and HFCL. CISCO, Nokia and Tejas Networks have provided best in class technology for the network. As part of TDN, T-Fiber has been able to demonstrate 1gbps to homes and offices, and provide 100 Mbps WiFi hotspots in the villages. This is the first time that such a high speed bandwidth is provided in any village in India.
Services such as TeleMedicine, eEducation, video conference, Government to Citizen Services such as MeeSeva, IPTV, IP-Phone services are commissioned. The current services partners under the TDN include Cisco,Sterlite, HPE, MeeSeva, TSAT, Corpus, Tera-Soft, D-Link, Quadgen, E-Abhyas, Micromax, Kisan Raja, Celkon. TDN will be available for at least one year to welcome the Industry/Government players to develop services and technologies which will benefit the people of Telangana.