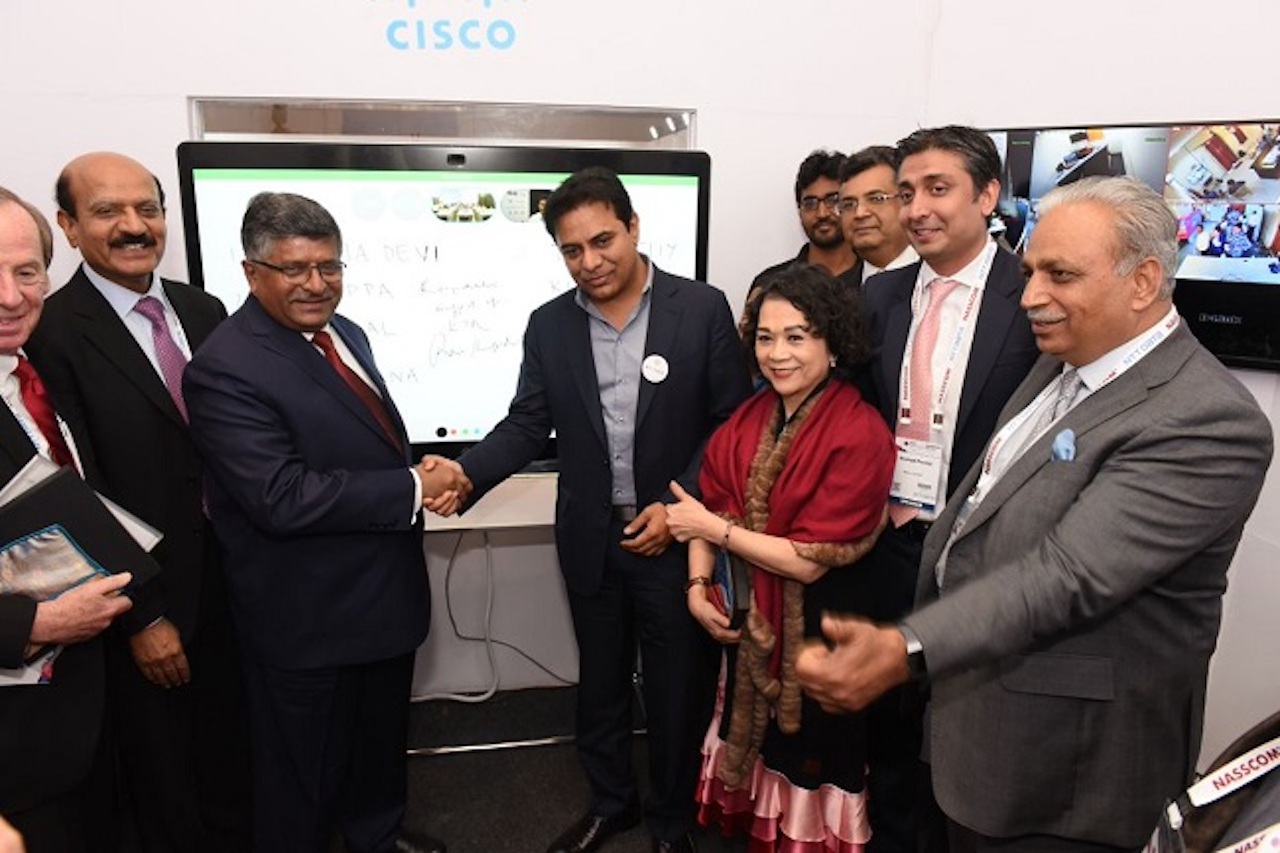 Ravi Shankar Prasad, Union Minister for Electronics & IT along with KT Rama Rao, IT Minister of Telangana launch TDN

T-Fiber is the government’s initiative to establish infrastructure to enable affordable, high speed broadband connectivity and digital services to 10 Zones (31 Districts), 584 Mandals, 8,778 Gram Panchayats, 10,128 villages, 83.58 lakh households and more than 3.5 crore people. The state will be investing Rs 5,500 crore into the project.

“We are building one of the densest and fastest broadband networks called T-Fibre with a vision to achieve 100% penetration. Through T-Fibre, we aim to provide each and every household of Telangana with optical fibre cable connectivity. We aim to provide government-to-citizen and government-to-government services very effectively with state-of-the-art infrastructure,” KT Rama Rao, Minister of IT for Telangana said.

“With T-Fiber, we are creating an optic fiber highway to enable all gram panchayats to have high speed connectivity. For example, gram panchayats don’t have Mee Seva centres due to lack of connectivity. So we are connecting all government services through this and delivering it to citizens,” said Anand Kasula, project head, T-Fiber.

The project also aims to connect households, which will enable them to make online payments and use other online services, provide them with set up boxes so that they have access to live government TV channels.

T-Fiber, which is currently being piloted in four villages in Telangana, will be extended to all 8,778 gram panchayats by December 2018. The four villages are Maheshwaram, Thummuluru, Mansanpally and Sirigiripuram. The government has invested Rs 13 crore in the pilot project.

In Maheshwaram, which has a Public Health Centre (PHC), the government is piloting telemedicine where the PHC works with super specialty doctors of Apollo Hospitals through video conferencing. In cases that cannot be diagnosed by the local PHC, patient data is shared with the doctor at Apollo and both doctors together diagnose and treat the patient. The same is being piloted in Mansanpally as well. In Thummuluru, the government is piloting e-learning services where students in schools can be taught and trained by qualified teachers through video conferencing. It is also piloting a kiosk with Sterlite Tech. This kiosk helps residents of the village with all computing needs in a single device. It allows villagers to make video calls, attend training sessions using Virtual Reality where anyone from across the country can train them. The kiosk allows controlling of street lights, has sensors to help villagers know the soil moisture, temperature, humidity and other such factors.

The kiosk also allows them to send an email using a speech to text technology, which allows them to speak in Telugu as well. It also prints land records, receipts and allows interaction with Aadhaar system. Other services such as e-agriculture, banking, Mee Seva, security surveillance, panchayat services are also being offered. It is also looking at monetisation services such as telephone connection, broadband internet, cable TV, cellular operators and IPTV services.

It has also partnered with several large corporates that are helping deliver services to the residents of the gram panchayats, similar to the kiosk powered by Sterlite Tech.

“We are making the infrastructure and any player can demonstrate their services. We are keeping this network for a year for anyone to showcase their services. Services, apps, etc can be integrated,” Anand says.

The idea is to build on the digital India mission and connect all villages and gram panchayats of the state using optic fiber and offer them high speed broadband network. The high speed broadband connectivity will be provided to government offices, educational institutions, hospitals, banks and other public service institutions.

Going along with the Centre’s BharatNet programme, the Telangana government showcased its ambitious Fiber Grid (T-Fiber) program at the World Congress on Information Technology (WCIT) 2018 in Hyderabad on 19th Feburary 2018.

It established a Technology Demonstration Network (TDN), which is the pilot of the program, covering nearly 50 government offices and households in four villages of Ranga Reddy district and showcased the services being offered. The first showcase of the government’s ambitious project, Union Minister for Electronics & IT Ravi Shankar Prasad, inaugurated the TDN on the sidelines of the summit.